BTC
ETH
LTC
DASH
XMR
NXT
ETC
DOGE
ZEC
BTS
DGB
XRP
BTCD
PPC
CRAIG
XBS
XPY
PRC
YBC
DANK
*This post may contains affiliate links, so we may earn a small commission when you make a purchase through links on our site at no additional cost to you.

Deal Or No Deal: The Banker’s Secret 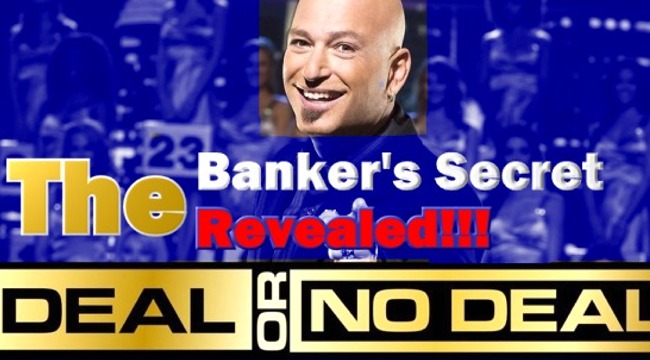 Deal Or No Deal: The Banker’s Secret | “Deal or No Deal” a popular game show on NBC has captured audiences with its large prize amounts, and unorthodox game show structure. Game show fans have become accustomed to trivia, dating, and stunt-based games. “Deal or No Deal” presents a new format for game shows, but what is the secret behind the banker’s offers?

I love watching this show because the whole concept of the bankers offers tempting the players to abandon the game and walk away with some amount of dollars really appeals to me. I play the game in my head, telling the players which offers they should accept, and which they should walk away from. There is an easy way to figure out which offers are good (and which are bad) through a simple financial principle.

READ ALSO: All You Need to Know About Mortgage Loans.

Expected value is the principle, and it is one of the basic principles of finance. It allows you to assign a value to something now, knowing that the future is uncertain.

Deal or No Deal: How to decide

The real point of the game is to approximate, at any given point, what the expected value of the suitcase in your hand is.

Step 1: What is the potential gain? At any point in the game, you can determine the potential gain. The highest values left on the board are the maximum amount you can gain from playing. At the start, this would be the $100,000 through $1 million prizes. As the game progresses, and cases are eliminated, the potential gain adjusts downward.

ALSO SEE: The Logic Behind Trading Gold – When to Buy and Sell.

Summing these values, the approximate expected value of your case is $125,000. If the banker offers you anything less, you should say, “No deal!”

So how does the show keep from losing money on every player? The banker almost never offers anything over the expected value when there are still large amounts on the board. Players compare a paltry $150,000 to the possible million-dollar prize and they can’t resist.

So now you know how to play. And how to ‘beat the banker!’

Source: QuotePeeps.Com | Deal Or No Deal: The Banker’s Secret.

*This post may contains affiliate links, so we may earn a small commission when you make a purchase through links on our site at no additional cost to you.
Deal or No DealExpected ValueFinance PrincipleGame ShowPersonal Finance
0
Share

The Different Types of Lenders You Should Know

Day Trading Your Way To Success

Day Trading Your Way To Success

The Logic Behind Trading Gold – When to Buy and Sell

Motorcycle Loans: How to Apply for A Loan

3 Steps to Picking A Profitable Stock

How to Borrow Student Loans Responsibly

A Simple Guide to Understanding Loan

ATV Loans Calculator: How to Calculate Your Loan Repayment