4 Questions You Must Ask Before You Marry 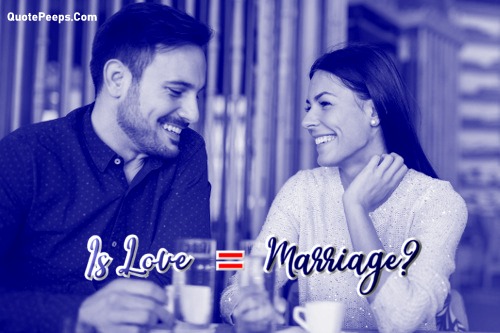 4 Questions You Must Ask Before You Marry | Does love equal marriage and vice versa or it could start with love and end up being something else?

“How do you know when you’ve met the right one?”

Questions You Must Ask Before You Marry

Almost everyone asks this question at some point in their lives; unfortunately, there are not too many who get a concrete answer. But if you’re reading this article, then you’re one of the lucky few. Interestingly, the criteria for choosing a spouse can be boiled down to just four characteristics. If you can find somebody with all four then it’s highly likely that you’ve found your life partner.

1) What is This Person’s Core Values?

Before you decide to marry someone, make sure that they are fully committed to some kind of objective moral and ethical standard. Whether we realize it or not, everyone has some kind of core value that is central to their personality. And when push comes to shove, that value is going to be the most important thing in the world to that person.

For example, Jerry’s core value is adventure. When Jerry starts to date Diana, he happens to be volunteering at the local Emergency Room. He goes there every night, holds people’s hands, calms them down. And Diana’s thinking to herself that Jerry must have a heart of gold if this is how he’s spending his spare time. Now, Jerry might really have a heart of gold. But he’s volunteering because of his love for adventure. The ER is filled with action, it’s exciting.

So right now, Jerry’s adventurousness happens to be expressing itself in a kind way. But that could change. Jerry might stop volunteering, and start trying other adventures that Diana may find unpleasant, dangerous, or even unethical. However, if Jerry’s core value is a commitment to goodness and caring, then everything he does will rotate around that, including his marriage. And Diana will be a very lucky woman if she marries him.

So how do you get to know the true Jerry? Surprisingly, it’s not that difficult. No matter what a person’s core value is, you will see him or her sacrificing for it on a daily basis. If Jerry’s core value is an adventure, then he might risk an accident in order to speed through an intersection or arrive late at work because he followed a police chase. If Diana follows him carefully, she’ll see that he places adventure above other important things on his list of priorities.

SEE MORE: Could This Be The Best Advice From A Divorce Attorney?

But if Jerry’s core value is goodness, then Diana will see him give up on certain things in order to be kind. If the waiter mixes up his order, he’ll say thank you and eat the dish anyway. He’ll let the other guy cross the intersection first, or he might be late to work because he drove a little old lady home with her groceries. If Diana follows him carefully, then she’ll see him let go of some of his own desires in order to take care of other people.

So look for someone who is committed at the core to a higher set of values that you can appreciate.

Could This Be The Best Advice From A Divorce…

2) Does This Person Treat Others Well?

Number two is obvious: You want to marry someone who is going to take care of you and treat you well. How to figure it out? Simple. Spend time with this person, and pay attention to how they treat others whom they don’t necessarily care about because they’re not trying to charm them. Do they thank the attendant who pumped gas for them? Are they courteous to people at checkout counters? Do they curse out people who don’t deliver on time, like telephone operators or overworked waitresses? Do they tend to drive aggressively, as if there’s no one else on the road?

Ask yourself questions like these and take note of the answers – because they reflect characteristics that will come out down the line. Most people don’t guard themselves so carefully that they’ll hide how they treat others. So watch them, and you’ll know how they’re going to treat you after you’re married.

3) Do We Communicate Well With Each Other?

In other words, make sure that you understand each other. This may seem obvious, but it’s not. Sometimes you can see a couple in a fight and they argue for an hour, two hours, maybe even overnight. And then, at the end of round 16, it turns out that the whole thing was just a misunderstanding: “Oh, I thought you meant that…That’s not what you meant? Oh, then we agree.”

Although on an occasional basis this can happen to anyone, if it’s happening constantly then it’s not a good sign because that may not change. If you’re constantly misunderstanding each other, then you might want to put this relationship on hold for a while.

4) Are We Physically Attracted to Each Other?

Physical attraction is an essential part of marriage. You cannot marry someone if you aren’t physically attracted to them. And while men arrive at this conclusion somewhat quickly, women should give themselves some more time. Very often, a woman may not feel attracted to a man initially, but after she gets to know him she finds him much more attractive than before.

A word of caution: Although physical attraction is essential, you can’t base a marriage on physicality. Whatever is going on physically is meant to be an expression of something deep that is happening on the emotional and spiritual level.

The rule is – make sure that physical attraction is there, but don’t get swept away by it. The other three characteristics are just as important, if not more so.

So there you have it. The next time you date someone, put what you’ve learned here into practice. It’ll save you a lot of time and heartache, and you might find yourself walking down the aisle faster than you think.

Did you find this article useful? Kindly share 4 Questions You Must Ask Before You Marry on Facebook and other social media networks.

*This post may contains affiliate links, so we may earn a small commission when you make a purchase through links on our site at no additional cost to you.
Marriage Advice
0
Share

How To Choose A Cash Advance Lender

Could This Be The Best Advice From A Divorce Attorney?

Top 7 Ways to Self-discovery After Divorce

How To Get A Cheap Divorce Getting Rid of Expenses

The Benefits of Natural Medicine That Will Amaze…

All You Need to Know About Mortgage Loans

Don’t Be Money Ignorant Read This!

What You Should Know About Pericardial…

How To Control Your Diabetes For Life

This website uses cookies to improve your experience. We'll assume you're ok with this, but you can opt-out if you wish. Accept Read More